The shotgun wedding between Uncle Sam and the mortgage giants, Fannie Mae and Freddie Mac is going through a rough patch.  There are two main reason relationships hit the rocks, sex and money.  No, it is not sex because that would be weird.  It’s money, too much of it.

Uncle Sam spent the past five years trying to figure out how to get out of his arranged marriage to the ugly beasts.  But that was before the Obama administration announced this week Fannie and Freddie could “earn” at least $183 billion over the coming 10 years.  “Absent another major real estate downturn, the administration is lowballing future returns,” former Fannie Mae executive Bill Maloni told Inside Mortgage Finance.

Now Fannie and Freddie are becoming much too pretty to divorce and go their separate ways.  Greed, oops, green is Uncle Sam’s favorite color.

that profit-rate continues, they could earn $48.4 billion a year combined or $484 billion over the next 10 years, according to calculations made by IMF.

Fannie Mae and Freddie Mac, which were created by the federal government before becoming publicly traded companies, buy mortgages from lenders and package them into securities.  They guarantee payments of principal and interest.

Uncle Sam came to their rescue in 2008 when their losses threatened to demolish any hope of resurrecting the housing market.

What a difference a year makes.  It is all due to the increase in housing prices.

The government is glowing in all of the new found wealth.  But have they figured out a way to prevent another housing crash?  Fannie and Freddie’s draconian, ridiculous underwriting guidelines are not the answer.

Under the terms of an agreement with the Treasury, Fannie and Freddie will be allowed to retain only $3 billion in net worth.  Any profits beyond that amount will go to taxpayers.

White House analysts are now saying Fannie and Freddie could return billions of dollars in profits to taxpayers who bailed them out.  Is your check in the mail?  I don’t know about you but I haven’t received a penny.  Maybe we should have gotten a pre-nup. 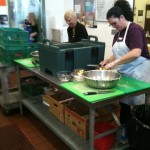 Are These Ghoul Times?